A Tradition of Caring 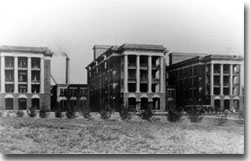 Augusta's commitment to care for the "sick poor" resulted in the building of a poor house and hospital on the 100 block of Greene Street in 1818. The first City Hospital provided local physicians an opportunity for medical education and became the first home of the Medical College of Georgia in 1829. While City Hospital generally served white patients, a Freedman's Hospital was opened to care for the many African-Americans who migrated to Augusta following the Civil War.

Augusta's City and Lamar hospitals (replacing Freedman's) operated under the auspices of local government, with medical and surgical control provided by medical college faculty. Nursing education was started at both hospitals in the 1890's, which would later evolve into the University Hospital School of Nursing.

City and Lamar hospitals were brought under one facility with the opening of a replacement hospital in 1915, which was named "University" in recognition of the ongoing clinical association with the medical college. Having Barrett, Lamar and later Milton Antony and Jennings wings, the first University Hospital served Augusta's citizens for 55 years.

Political upheaval caused the medical college to construct its own teaching facility, which opened as Talmadge Hospital in the 1950's. The Richmond County Hospital Authority moved to replace the aging University wings with a modern hospital, complete with coronary care and intensive care units, which opened in 1970.

University Hospital merged with Piedmont Healthcare on March 1, 2022, becoming Piedmont Augusta and a part of the No.1 healthcare system in Georgia.

Today, Piedmont Augusta continues to bring the latest in technological advances and treatment, while providing care and compassion to citizens of Augusta and surrounding communities.