Heart failure has many causes and can evolve in different ways.

It can be a direct, latest-stage result of heart damage from one or more heart or circulation diseases.

It can occur over time as the heart tries to compensate for abnormalities caused by these conditions, a condition called remodeling.

In all cases, the weaker pumping action of the heart means that less blood is sent to the kidneys. The kidneys respond by retaining salt and water. This, in turn, increases edema (fluid buildup) in the body, which causes widespread damage. 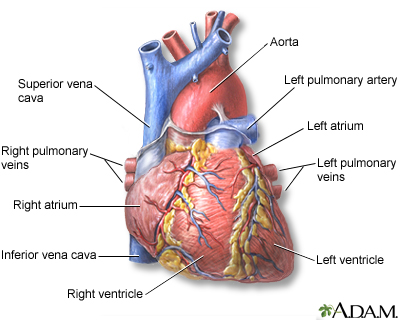 Coronary artery disease is the result of a process called atherosclerosis (commonly called "hardening of the arteries"). It is the most common cause of heart attack and involves the buildup of cholesterol in the arteries, with inflammation and injury in the cells of the blood vessels. The arteries narrow and become brittle. Heart failure in such cases most often results from a pumping defect in the left side of the heart. But both sides can be affected.

People often survive heart attacks. But many eventually develop heart failure from the damage the attack does to the heart muscles.

The valves of the heart control the flow of blood leaving and entering the heart. Abnormalities can cause blood to back up or leak back into the heart.

In the past, rheumatic fever, which scars the heart valves and prevents them from functioning properly, was a major cause of death from heart failure. Fortunately, antibiotics and other advances have now made this disease a minor cause of heart failure in industrialized nations. Birth defects may also cause abnormal valvular development. Although more children born with heart defects are now living to adulthood, they still face a higher than average risk for heart failure as they age.

Dilated cardiomyopathy involves an enlarged heart ventricle. The muscles thin out, reducing the heart's pumping action, usually on the left side. Although this condition is associated with genetic factors, the direct cause is often not known. (This is called idiopathic dilated cardiomyopathy.) In other cases, viral infections, alcoholism, and high blood pressure may increase the risk for this condition.

In hypertrophic cardiomyopathy, the heart muscles become thick, which can cause mechanical and electrical problems in the heart. Sometimes the walls of the heart become so thick that blood has difficulty being ejected from the heart. Patients may be at risk for sudden, deadly arrhythmias because of abnormalities in the conduction system. Hypertrophic cardiomyopathy may be due to a genetic defect that causes abnormalities in the heart muscle cells themselves. This condition occurs in about 1:500 people in the general population, and is often the cause of sudden death in young athletes.

Restrictive cardiomyopathy refers to a group of disorders in which the heart chambers are unable to properly fill with blood because of extreme stiffness in the heart. The heart is of normal size or only slightly enlarged. However, it cannot relax normally during the time between heartbeats when the blood returns from the body to the heart (diastole). The most common causes of restrictive cardiomyopathy are amyloidosis and scarring of the heart from an unknown cause (idiopathic myocardial fibrosis). It may occur after heart transplant.

Chronic obstructive pulmonary disease (severe chronic bronchitis or emphysema) and other major lung diseases are risk factors for right-sided heart failure. Pulmonary hypertension is increased pressure in the pulmonary arteries that carry blood from the right side of the heart to the lungs. The increased pressure makes the heart work harder to pump blood, which can cause heart failure.